Today I spent a few hours wrapping my head around an issue where some websites weren’t able to connect properly to PayPal.com. I found it pretty tricky to understand because it involved quite a few technologies and programs:

And each of those programs has various versions, some which don’t play nicely with each other.

I like making analogies to the real world in order to better understand computer stuff. So here we go: 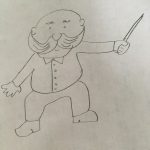 Imagine a gradeschool penpals initiative. Principal Helen Powers tells 5th grade teacher, Mr. Curls, to have the kids write letters off to another school somewhere else in the world. Mr Curls tells one of his students, Open-mouthed Susie-Lee Lewinski, to write a letter to another child on the other side of the planet. Here’s their pictures:

So when everything goes smoothly:

What each character represents:

When everything works smoothly,

There are a few problems that can occur both between clients and servers communicating over the Internet, and between grade school penpals.

Or, the servers don’t have a shared supported version of TLS or SSL. In the case with PayPal, for security, they decided their server would only communicating using TLS version 1.2 or higher (and no version of SSL). This is fine for most websites on servers which have had openSSL updated in the last 5 years or so (specifically, servers should at least use openSSL version 1.0.1c/). However, if openSSL is too old, it won’t know how to communicate in TLS 1.2, and so PayPal will reply with an error like this:

Or, the PHP code specifies a specific version of TLS or SSL must be used, but the other server refuses to use that version.

Eg, in PHP code you can set curl_setopt ( $handle, CURLOPT_SSLVERSION,CURL_SSLVERSION_SSLv2 ) that will tell cURL to tell openSSL to only communicate using SSL version 2, not any other version of SSL or TLS. That’s fine if the other server is willing to communicate in SSLv2, but if they aren’t, like in the case of PayPal, they’ll respond with another error message.

Miscommunication between Mr Curls and Susie

cURL version 7.29 had a problem that it supports TLS 1.2, but it needs to specifically told to use it instead of an different version of SSL or TLS. (This is like unless you tell Mr Curls that it’s ok for Susie to communicate in English, he’ll tell her it’s not ok.) According to this WordPress Trac ticket, the problem could be solved by specifically instructing cURL to use TLS 1.0 or higher (as of 2015, 99% of servers supported it) by using curl_setopt ( $handle, CURLOPT_SSLVERSION, CURL_SSLVERSION_TLSv1 );.

Also, cURL version 7.24 with openSSl 1.0.1e appears to have a different bug: if you added the above-mentioned line telling cURL to use TLS version 1 or higher, curl_setopt ( $handle, CURLOPT_SSLVERSION, CURL_SSLVERSION_TLSv1 );, openSSL wouldn’t communicate in TLS 1.2. (This is like Principal Powers telling Mr Curls “Susie is allowed to communicate in Spanish, Esperanto, or English” but Mr Curls misheard and missed the last two languages mentioned, and so thought Susie should only be allowed to communicate in Spanish). Ironically, if the PHP code doesn’t specify any SSL or TLS version (or specifies TLS 1.2), openSSL is able to auto-negotiate the best version of TLS to use.

The Dilemma We (Hopefully) Solved

In section “Miscommunications with Mr Curls”, you see that for cURL 7.29 we should add curl_setopt ( $handle, CURLOPT_SSLVERSION, CURL_SSLVERSION_TLSv1 ); to fix handshake issues, but for cURL 7.24 with openSSL 1.0.1e that actually creates issues. So what’s the best general approach (that works for most version of cURL)?

An important point though: for our currently purposes, it’s mainly communication with PayPal that was causing us grief.

So, our PHP code now specifically instructs requests going to PayPal to only use TLS1.2. If the version of openSSL in-use on the server doesn’t know how to use TLS 1.2, the communication will fail. But it’s doomed anyway: it doesn’t know how to communicate with TLS 1.2 and PayPal won’t accept anything else.

But, requests going to other servers, which might not yet support TLS 1.2, can fallback to openSSL’s normal TLS/SSL-version auto-negotiation, which get it right 99% of the time.

What’s more, we saw the most popular e-Commerce WordPress plugin is doing exactly that too. So we’ll be in pretty good company anyway.

Do you see a problem in my logic? Or any parts that don’t make very much sense? Please let me know in the comments!